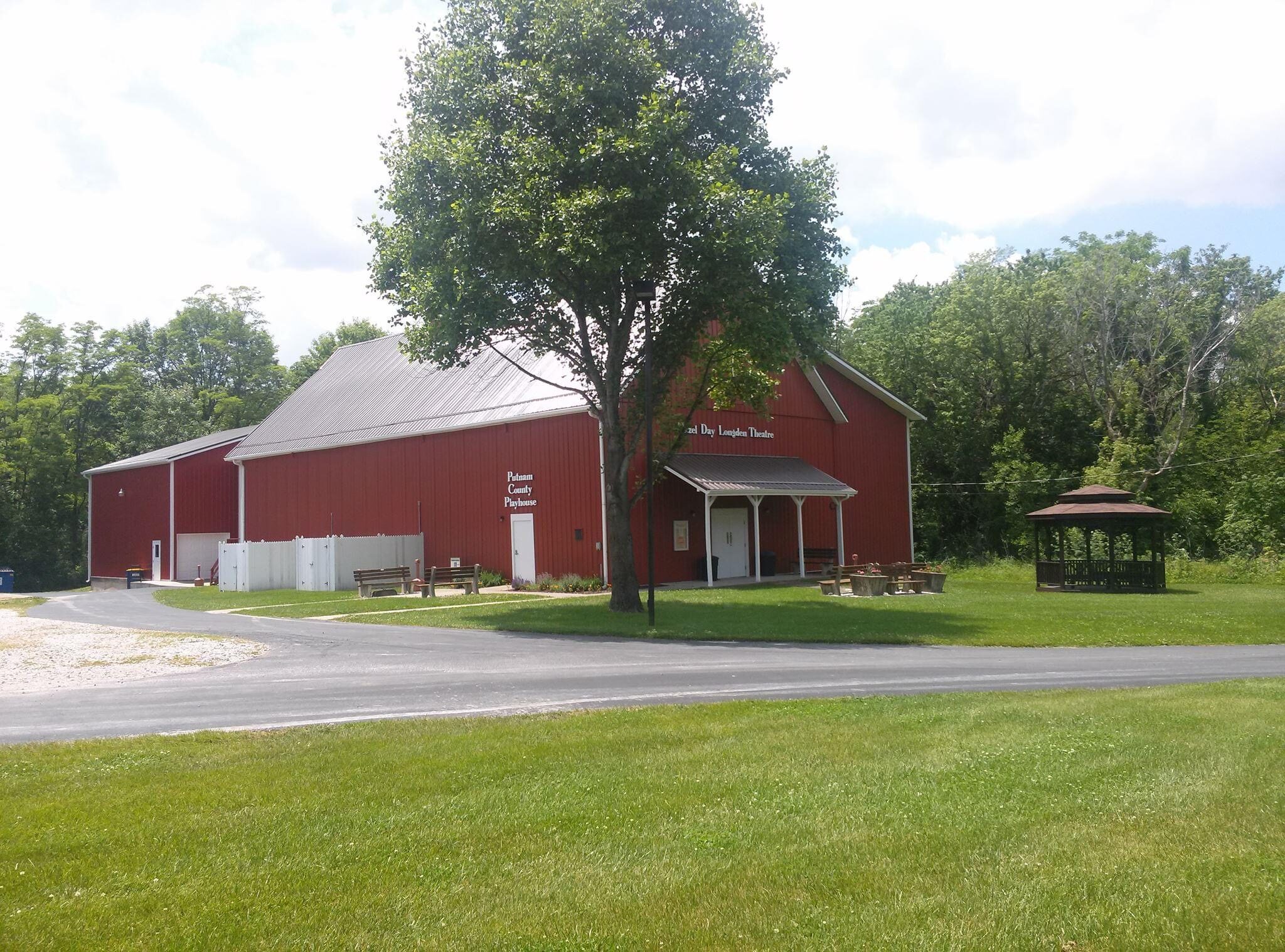 Live theatre is coming back to the Hazel Day Longden Theatre. The Putnam County Playhouse will open its 60th season with a production of Disney’s The Hunchback of Notre Dame. The musical will play ten performances June 1-5 and June 8-12. Tickets for the show will go on sale when the box office opens at 5 p.m. on Monday, May 31. All performances begin at 8 p.m. and all tickets are $10.

All Covid protocols will be followed. Patrons are asked to wear masks and practice social distancing while in the theatre. There will be 80 seats only available for each performance. Several performances will have limited seating available because of the advance season ticket sales.

This version of the classic story has songs from the Disney animated feature and the script is based on the book by Victor Hugo. Music is by Alan Menken and lyrics by Steven Schwartz. The book is by Peter Parnell.

Director for the production is Shelly McFadden. Vocal Director is Lori Miller. Rehearsal pianist and pit conductor is Morgan Asher. Choreographer is Joshua Bain who also serves as assistant director. He is being assisted by Sarah Armitage with the dances. Set design is by Ric McFadden and the technical director is Dustin Bond.

The production is sponsored by:

The title role of Quasimodo the Hunchback of Notre Dame will be played by Dustin Bond. Samantha Shelton plays the gypsy girl Esmerelda who befriends him. Ric McFadden and Jay Prewitt play the Frollo brothers, Claude and Jehan. Other leading roles are Clopin the King of the Gypsies played by Grant Craig and Captain Phoebus played by Nathan Brown – both actors making their PCPH debuts in this musical. Playing multiple roles are Chris Wurster, Anna Harris, Kayla Norman, and Noah D. Pettit.

Among those joining Asher in the pit are Ally Trexler (violin) and Dede Schwomeyer (percussion).

Stage Manager is Cameron Wunderlich. Props master is Pettit. Also working on the stage crew are Sarah Nowling and Ally Taylor. Costumes are by Shelly and Sarah. Running the sound board in Grace Elmore and Därvell Barger. Spotlight operators are Tucker Elmore and Josie Lyons.

Director Caroline Good has announced that registration is now open for the 2021 Children’s Theatre Workshop. Last year, the CTW was conducted online. “All protocols will be observed, but we hope to have an in person Workshop this season,” said Caroline. “We will make that decision as the time approaches.”

Two additional sessions of auditions for the musical The Hunchback of Notre Dame have been scheduled by director Shelly McFadden.  The first will be Sunday, March 28 at 3 p.m. and the second will be Monday, March 29 at 7 p.m.  Both sessions will be in the Rehearsal Center at the Hazel Day Longden Theatre in Greencastle.

The show will be produced June 1-5 & June 8-12. It will open the planned 60th Season of Putnam County Playhouse. Details are still being worked out. The board is watching the COVID protocols carefully and decisions will be made with the safety of our participants and audiences in mind.

Among roles in the musical are Quasimodo, the title character; Esmerelda, the beautiful dancer he falls in love with; Frollo, the archdeacon of Notre Dame; and Phoebus, the captain of the Cathedral Guard.  McFadden is also looking for a large ensemble – or congregation.  Numerous supporting roles will be cast from the congregation.  There are opportunities for many performers in singing and dancing roles.

Click HERE to learn more about the roles/characters and to read about the production.

You can print out an audition form in advance HERE.

Also needed are a few more members for the Choir, who sing throughout the production. Persons interested in performing in the Choir can audition during these sessions as well. You can print out an audition form for the Choir HERE.

Those wishing to audition should prepare no more than 32 measures of a song.  An accompanist will be provided. Please bring your sheet music. A capella auditions are strongly discouraged.  There will also be a dance portion of the audition.  All those auditioning should be at least 16 years of age.  Those attending should wear masks, and social distancing will be observed during the process.

Plans for our 60th Season continue. Director Shelly McFadden is planning two sessions of auditions for members of the choir in her production of the musical The Hunchback of Notre Dame. The show is scheduled to be presented in June with dates to be announced.

The choir consists of two double quartets. Those appearing in this capacity will be onstage during the entire play. These participants will also have their music books with them.

The auditions for Choir Members will be Sunday, March 14, at 3 p.m. and again Monday, March 15, at 7 p.m. Both sessions will be in the Rehearsal Center at the Hazel Day Longden Theatre. Those auditioning are asked to prepare a musical selection of not more than 32 measures. An accompanist will be provided. [A capella auditions are strongly discouraged.] And all Covid restrictions will be in place including wearing masks and social distancing.

All of those auditioning should be at least sixteen years of age. Auditions for leading roles and members of the congregant who will play multiple roles will be March 28 & March 29. More details are forthcoming.

To read more about the show click here and here.

This year’s annual two-week-long Shakespeared! Workshop at the Putnam County Playhouse centers around A Midsummer Night’s Dream. The middle school group will perform a more traditional version and the high school group will present its off-beat comedic version, complete with a lively soundtrack, chase, and pop-culture references.

Both groups meet in the afternoons daily during the two weeks. Activities include theatre games, learning voice, stage movement, and acting techniques, and, of course, rehearsing the play.  The middle school group meets Monday-Friday 12:30-2:30pm, and the high school workshop meets Monday-Friday 3:00-5:30pm with performances Friday and Saturday, June 26-27 at 7:00pm, when each group presents their own very different versions of the play.

We will plan on adhering strictly to the updated CDC protocols for Covid-19 at the time of the workshop. Last year, all participants wore masks during sessions, we created physical distanced staging, and we kept air flowing throughout the playhouse, or worked outside.  Props and set pieces were wiped down frequently, and we provided hand sanitizer.  We’re hoping for the best, but are prepared to implement these protocols again and consider moving the performances to the park, if necessary.

The scripts will be available soon on the playhouse website’s Youth Theatre Workshop page. So, feel free to read it before our first day. We will read through the play on day one, and the players will have a chance to note their role preferences. The roles will be cast that evening, and rehearsals will begin on day two!

THERE ARE PARTS FOR EVERYONE!

Shakespeared! is tailored to provide young players with an opportunity to engage with Shakespeare’s text in a fun way and to see the potential interpretations that lie within the text.  For more information click here.

Details and sign up information for our annual July Children’s Theatre Workshop will be posted soon.

As we move ahead with our plans for our 60th Anniversary Season, we hope that we will be able to produce the four shows that we have announced for the summer 0f 2021.

We are still watching details about the Pandemic and will follow all protocols as prescribed by county, state, and Federal authorities. The board is planning a meeting in early March to discuss changes we may have to make to our season. Any and all of those decisions will be posted here, so keep watching the Website.

Until then, if you are interested in participating in a production this summer, you can find all the information you need at the links below. Stay safe and we hope to see you at the barn!

THE HUNCHBACK OF NOTRE DAME

You Can’t Take It With You

We sincerely hope that we can be onstage this summer and that you will be able to join us. Please know that all dates in this post are TENTATIVE and depend entirely on the protocols that will be in place in the coming weeks.

Thank you for your continued support.

Planning a production and putting together all of the pieces can’t wait until the last minute! So director Shelly McFadden decided to go ahead with work on The Hunchback of Notre Dame – our first planned production for 2021.

“One of the advantages of directing the first show is that you get to have the main stage for your entire rehearsal process,” said Shelly. “I love the Rehearsal Center, but it is fun to have the Barn to yourself for a few weeks.”

Director Shelly McFadden dropped her mask briefly to take a selfie with the crew.

The second production Pillow Talk with director Andrew Ranck will begin its process in the Rehearsal Center early in June.

Shelly and husband Ric – who is the set designer & construction captain for the show – got their crew together earlier this week for some preliminary stage work. Also on hand were Dustin Bond, Connor George, Noah Pettit, and Caydence McFadden.

Board members are watching the news and following the Pandemic News and Restrictions closely as spring approaches. Final decisions about auditions, performances, and tickets will be announced as they are made in accordance with state guidelines.

You can read about the scheduled audition dates for Hunchback of Notre Dame HERE.

Additional show information and Director’s Notes for all productions will be posted in February!!

We would like to thank everyone who has contributed to our 2021 Fund Drive! You make it possible for us to do what we do.

We are meeting regularly and keeping up with all of the news concerning the Pandemic including any new restrictions that may be posted.

It is our genuine hope that we will be able to present our 2021 Season!

Be safe! And we hope to see you soon at the Barn!

Our December Board meeting was held via the Zoom App. We met on Tuesday evening, December 16, and we all had a great time.

The 2021 Budget was Approved and all of the committee chairs gave their reports. Everyone was optimistic about the possibility of a 2021 season.

We are watching developments carefully and will move forward as protocols allow.

Please enjoy our new website layout as we continue to work on it to make it an valuable tool for you to know what’s happening for the 60th Season of the Putnam County Playhouse and the Hazel Day Longden Theatre. 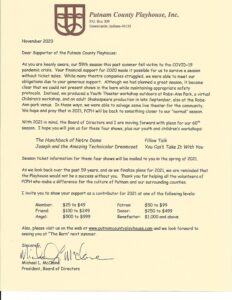 Watch your mailbox for your Annual Fund Drive Letter!